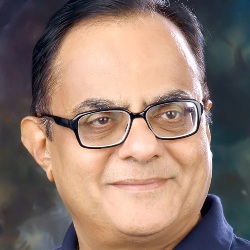 Ajay Kumar Sood is an Indian physicist, researcher and is serving as the 4th Principal Scientific Adviser to the Government of India. He is also holder of 2 US and 5 Indian patents, known for his pioneering research findings on graphene and nanotechnology. He is a Distinguished Honorary Professor of Physics at Indian Institute of Science, Bangalore. The Government of India honoured him in 2013, with the Padma Shri, the fourth highest civilian award, for his contributions to the fields of science and technology. Sood was elected a Fellow of the Royal Society in 2015. He has been on the Physical Sciences jury for the Infosys Prize from 2019.

How old is Ajay K. Sood?