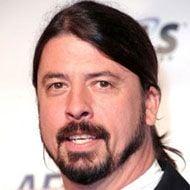 David Eric Grohl is an American musician, songwriter and record producer. He is the founder of Foo Fighters, for whom he is the singer, guitarist, and primary songwriter. He was the drummer for Nirvana from 1990 to 1994. At 17, Grohl joined the punk rock band Scream after the departure of their drummer Kent Stax. Grohl became the drummer for Nirvana after Scream broke up in 1990. Nirvana's second album, Nevermind, was the first to feature Grohl on drums and became a worldwide success. After Nirvana disbanded following the death of lead singer Kurt Cobain in April 1994, Grohl formed Foo Fighters as a one-man project. The first Foo Fighters album was released in 1995, and a full band was assembled to tour and record under the Foo Fighters name; they have released ten studio albums. Grohl is the drummer and co-founder of the rock supergroup Them Crooked Vultures and has recorded and toured with Queens of the Stone Age. He has also participated in the side projects Late!

How old is Dave Grohl?

Dave Grohl is 53 Years, 7 Months, 1 Days old. Dave Grohl was born on Tuesday and have been alive for 19,571 days, Dave Grohl next B'Day will be after 4 Months, 30 Days, See detailed result below.