Jayamala was born on February 28, 1959 in Dakshina Kannada , Karnataka. Jayamala is an Indian Film Actress. 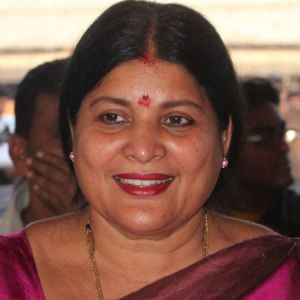 Jayamala is an Indian actress and politician. She served as the Minister for Women and Child Development and Empowerment of Differently Abled and Senior Citizens in the Government of Karnataka, by virtue of being a member of the Karnataka Legislative Council. She served as the female president of the Karnataka Film Chamber of Commerce between 2008 and 2010. Her popular Kannada films include Premada Kanike, Shankar Guru, Antha and Chandi Chamundi among several others. She has produced and acted in the award-winning Thaayi Saheba.

How old is Jayamala?

Jayamala is 62 Years, 1 Months, 26 Days old. Jayamala was born on Saturday and have been alive for 22,700 days, Jayamala next B'Day will be after 10 Months, 5 Days, See detailed result below.