Ricky Ponting was born on December 19, 1974 in Launceston , Tasmania. Ricky Ponting is an Australian Cricket Player. 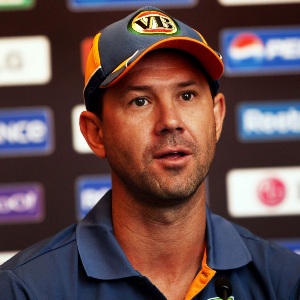 Ricky Thomas Ponting is an Australian cricket coach, commentator, and former cricketer. He is considered one of the most successful captains in international cricket history, with 220 victories in 324 matches with a winning ratio of 67.91%. Ponting was captain of the Australian national team during its 'golden era'; between 2004 and 2011 in Tests and 2002 and 2011 in One Day Internationals. He is a specialist right-handed batsman, an excellent slip/close catching fielder, as well as a very occasional bowler. He was named "Cricketer of the Decade 2000". Ponting represented the Tasmanian Tigers in Australian domestic cricket, the Hobart Hurricanes in Australia's domestic T20 competition the Big Bash League, and played in the Indian Premier League with the Kolkata Knight Riders in 2008. He is widely considered to be one of the best batsmen of the modern era, alongside players such as Sachin Tendulkar of India and West Indian Brian Lara.

How old is Ricky Ponting?

Ricky Ponting is 46 Years, 6 Months, 3 Days old. Ricky Ponting was born on Thursday and have been alive for 16,987 days, Ricky Ponting next B'Day will be after 5 Months, 27 Days, See detailed result below.