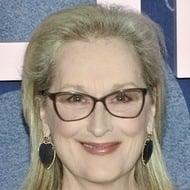 Mary Louise "Meryl" Streep is an American actress. Often described as "the best actress of her generation", Streep is particularly known for her versatility and accent adaptability. She has received numerous accolades throughout her career spanning over five decades, including a record 21 Academy Award nominations, winning three, and a record 32 Golden Globe Award nominations, winning eight. She has also received two British Academy Film Awards, two Screen Actors Guild Awards, and three Primetime Emmy Awards, in addition to nominations for a Tony Award and six Grammy Awards. Streep made her stage debut in 1975 Trelawny of the Wells and received a Tony Award nomination the following year for a double-bill production of 27 Wagons Full of Cotton and A Memory of Two Mondays. In 1977, she made her film debut in Julia. In 1978, she won her first Primetime Emmy Award for a leading role in the mini-series Holocaust, and received her first Oscar nomination for The Deer Hunter.

How old is Meryl Streep?

Meryl Streep is 73 Years, 3 Months, 9 Days old. Meryl Streep was born on Wednesday and have been alive for 26,764 days, Meryl Streep next B'Day will be after 8 Months, 21 Days, See detailed result below.